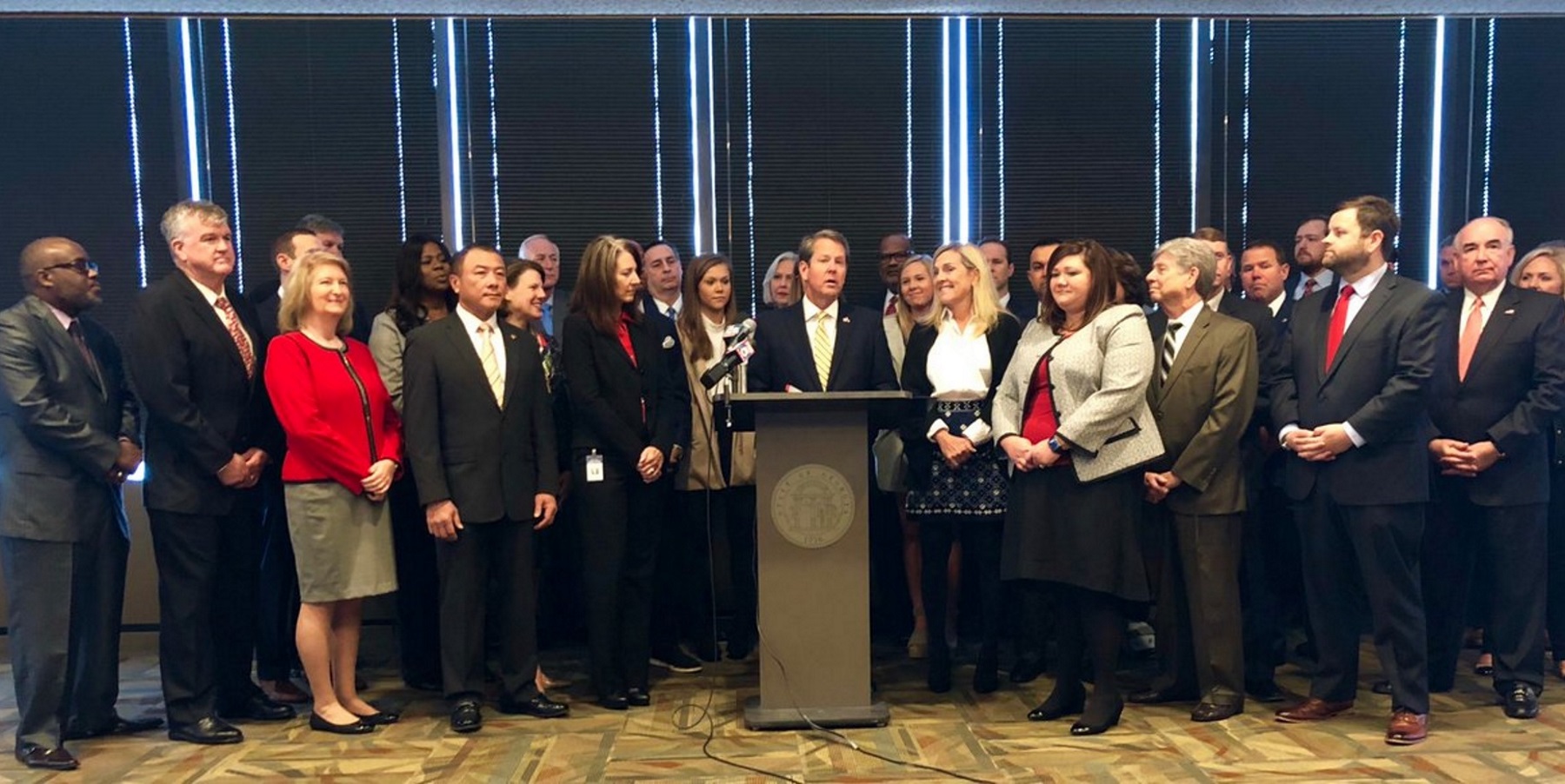 During a press conference Monday, Gov.-elect Brian Kemp said he supports a tax credit for Georgia's film and TV industry, and always has. There have been calls by some in the industry to pull productions out of Georgia to protest Kemp’s victory in the governor’s race.
Credit Courtesy of Brian Kemp for Governor
Tasnim Shamma
November 21, 2018
Share
Tweet
Share

Several prominent celebrities have called on the film and television industry to protest the recent election victory of Brian Kemp as Georgia’s new governor by pulling productions out of Georgia.

Meanwhile, Democrat Stacey Abrams has called on the industry not to boycott but, instead, to mobilize behind her.

During a press conference where he announced his transition team on Monday, Gov.-elect Brian Kemp said he supports a tax credit for Georgia’s film and TV industry, and always has.

Kemp also responded directly to the #BoycottGeorgia campaign, which began with a few Hollywood writers and directors calling for a boycott over the weekend after Kemp’s victory.

“I’ve been on record since day one of the campaign in supporting [the film tax credit], even when others said I wasn’t for political reasons,” Kemp said. “I’m not worried about what some activist from Hollywood is saying about the elections process in Georgia. They should call the county elections office and find out what really happened in this state because of that record turnout.”

Kemp said he would do what it takes to support the film tax credit.

“I’m going to continue to protect the film tax credit. The people I met with during the campaign – that’s what they are concerned about,” Kemp said. “They like our business environment. They like our low-cost environment: same reason our ports are doing good. There’s so much bureaucracy on the West Coast, a lot of that business is moving to Georgia.”

Cheryl Moses is an independent filmmaker and supports the call to boycott Georgia to protest the election results and racism in the South.

“How can all of these various productions come to Georgia when we have just witnessed the election being stolen?” Moses said.

Moses also narrowly lost an election against Republican incumbent state Sen. P.K. Martin in Gwinnett County by 3,201 votes. She said the film and television tax credit doesn’t benefit minority communities and independent filmmakers as much as it does big productions.

But Democrat Stacey Abrams said the entertainment industry should not boycott Georgia. And artists who would be impacted by the move — are rallying behind her — with a campaign called #WeAreGeorgia started by Atlanta actor Bethany Anne Lind.

I appreciate the calls to action, but I ask all of our entertainment industry friends to support #FairFightGA – but please do not #boycottgeorgia. The hard-working Georgians who serve on crews & make a living here are not to blame. I promise: We will fight – and we will win.

Lind plays a recurring role on the Netflix drama “Ozark” and the OWN television series “Greenleaf.”

“We’re not famous,” Lind said. “We don’t have millions of followers on social media, but we are here, we’re doing the work. Loving our neighbors.”

She said her colleagues would be out of work if the film and TV industry pulled out. Lind said she understands the impulse, “but boycotting our whole state right now is not the answer.”

Atlanta-based performer Diany Rodriguez said she understood the calls to boycott the state, but doesn’t support the boycott movement.

“We still have a voice, and we can still be a very strong motivator here in Georgia,” Rodriguez said. “It’s not a lost cause. I’m just conflicted as to how to reach out to people whose feelings are completely warranted. But I absolutely want to keep propagating new and wonderful art that can reach the masses and engender empathy and can change the face of media in general, which is what Atlanta is well on its way to doing and wouldn’t be able to do so well, without funding, without production.”

Lind said she wants to be able to stay in Georgia to oppose a possible religious freedom bill Gov.-elect Kemp might sign that opponents have called discriminatory toward several groups – including the LGBTQ community. Gov. Nathan Deal vetoed a bill, which would have granted Georgia religious nonprofits the ability to deny services to same-sex couples, in March 2016.

Topher Payne, a screenwriter who lives in Atlanta with his husband, said artists who support Abrams should stay in Georgia, to tell the story of the South.

“There’s a strength of storytelling that’s baked into the Southeast, and this is part of that story: the ongoing conflict between tradition and progress,” Payne said.

Dustin Lewis is an actor, instructor and producer in Atlanta.

“I’ve got a home and a family here,” Lewis said. “My husband and I have just started a production company here. We’ve got roots here. It directly affects everything about my life from career to personal to everything.”

Kemp has said he would only sign a religious liberty bill if it was identical to the federal bill that became law in 1993.

In the last fiscal year, Gov. Deal said the film and TV industry had a $9.5 billion impact on the state’s economy, with $2.7 billion in direct spending. There was a record 455 film and TV productions shot in Georgia in fiscal year 2018.

In Georgia, industry groups said the film and TV industry was responsible for 92,100 jobs and nearly $4.6 billion in total wages, including indirect jobs and wages. Since 2010, more than 300 new businesses have relocated or expanded in Georgia to support the industry.